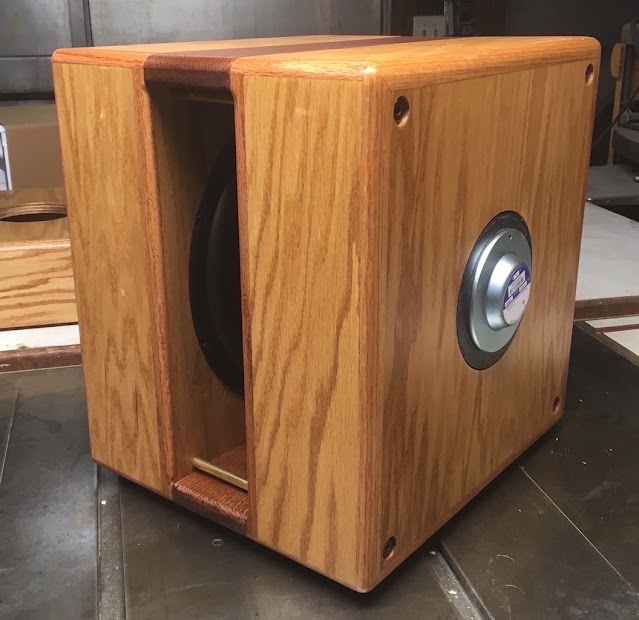 The speaker building psychosis got the best of me again after becoming intrigued by the unique dipolar subwoofers patented by German speaker builder Axel Ridtahler. The name "RiPol" is short for "Ridtahler dipole".
I will share my CAD drawings and parts lists of the version shown here (rounded edges) or a simpler version with exposed plywood edges-- just email me: Jazzman1953@gmail.com


Unlike most other subs; the woofers in a RiPol are in an opposing push/push configuration. The resulting compression in the front chamber actually lowers the woofers' fundamental resonant frequency by as much as 10Hz (depending on chamber volume and opening area). Thus; the Peerless 12" SLS woofers, which normally have a resonance of 27Hz in free air, can potentially extend to 17Hz in a Ripol configuration.

A RiPol is basically a compact, folded-baffle dipole, except the radiation pattern is a cardioid with a pronounced front lobe.  It can play very low, and because the cardioid patters nulls the off-axis output, it's less prone than conventional subs to excite the room resonance, which can give bass the dreaded “one-note boom”.
Ripoles pressurize the room differently than any other subs I've ever heard.  I would describe the sound as quality over quantity-- clean and unobtrusive, arising from nowhere and receding back to nowhere.   Great for jazz-- not so much for HT sound effects.
The Peerless SLS 12” woofers are favored by RiPol gurus and they are fairly inexpensive, but are no longer sold in the US.  I recently (2022) purchased several from a company named "THLP" in France, and they arrived in about a week.
Ridtahler's patent is in German and I had no idea how to model a Ripol anyway so I just followed some basic guidelines gleaned from posts by some smart guys at the DIY Forum:

Area of front chamber opening should be 1/3 to 1/4 of woofers’ combined piston area (SD). For woofers having more than 10mm X-max, use 1/3 SD minimum.For woofers with 10mm or less X-max, chamber area can be 1/4 SD.

Area of rear chamber opening should be 1/2 to 1 SD.

Chamber depth need not be greater than necessary to fit the woofer.

RiPols the size of mine (12" woofers) will have a rather loud chamber resonance that falls somewhere between 200hz-300hz-- so; you must either test and build a compensating *notch filter or choose a crossover frequency and slope significantly below the chamber resonance.
*Approximate values of notch filter with 4 ohm subs: L serial 3.3 mH, 0.4 Ohm Parallel LCR: 365uF, 1mH, 0.28 Ohm. Take these values with a grain of salt because you would likely need to do some measuring to determine the exact chamber resonance and then tweak the filter component values to exactly match up the notch to the resonance.
Rather than using a passive filter as described above, I use a DBX Driverack Venu 360 DSP/Crossover, and set the crossover frequency at 80Hz with 24db/octave slope, and then used the parametric EQ's to fine tune the sound to my liking.

The boxes are 3/4 red oak plywood, edge trimmed with quarter-round oak molding.  The center C-section assembly is glued up from solid white oak planks stained in a contrasting color for effect and indexed to the mating box halves with (4) 1/4 oak dowel pins on each side.

The assembly is held together with 1/4-20 all-thread rods and cap nuts as shown in the photos.

The woofer cutouts in the baffle boards are cut with a bit of extra clearance to allow the woofer magnets to center themselves in the holes in the outer panel. The holes in the outer panels allow .090" of clearance for the speaker magnets and I used foam speaker gasket tape to seal around the woofer magnets.
The woofers are wired in parallel and in phase (push/push, not push/pull) for 4-ohm load. 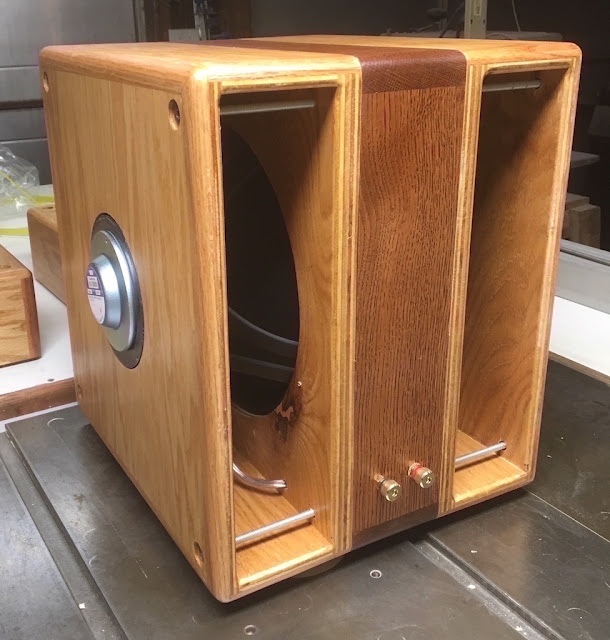 Back to ESL Build Page